​Other Types of Meningitis

Although meningitis is usually caused by bacteria or viruses, it can also be caused by injury, cancer, certain drugs or other microorganisms like fungi and parasites. Please visit CDC’s meningitis page for more information.

Bacterial meningitis is very serious and can be deadly. Death can occur in as little as a few hours. Most people recover from meningitis. However, permanent disabilities (such as brain damage, hearing loss, and learning disabilities) can result from the infection.
​
Several types of bacteria can cause meningitis. Leading causes in the United States include
These bacteria can also be associated with another serious illness, sepsis . Sepsis is the body’s extreme response to infection. Without timely treatment, sepsis can quickly lead to tissue damage, organ failure, and death.
​
The three main types of bacterial meningitis in the U.S. are:

The bacteria that cause meningococcal disease reside in the throats and nasal passages of approximately 10 percent of the general population. Researchers are unsure why the bacteria cause some people to become sick while most of the population is not affected.

Hib disease primarily attacks the very young, but has been nearly eradicated in the U.S. since the introduction of infant vaccination programs against Hib in the 1980s. Before the use of vaccination, Hib was the top cause of meningitis in children under the age of five in the U.S. 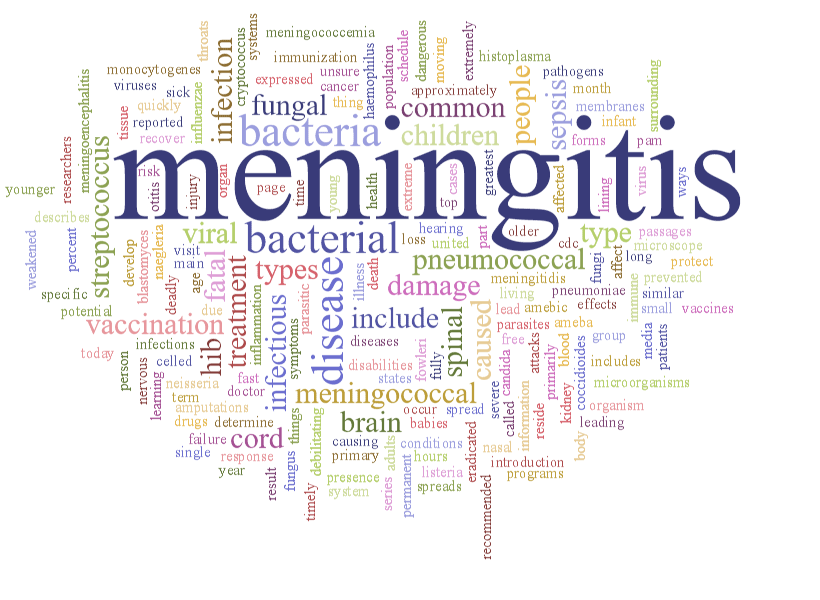 ​Viral meningitis is the most common type of meningitis, an inflammation of the lining of the brain and spinal cord. It is often less severe than bacterial meningitis, and most people get better on their own (without treatment). However, anyone with symptoms of meningitis should see a doctor right away because some types of meningitis can be very serious. Only a doctor can determine if someone has meningitis, what is causing it, and the best treatment. Babies younger than 1 month old and people with weakened immune systems are more likely to have severe illness from viral meningitis.

Fungal meningitis is rare in the United States. It can develop after a fungus spreads from somewhere else in the body to the brain or spinal cord.
Some causes of fungal meningitis include Cryptococcus, Histoplasma, Blastomyces, Coccidioides, and Candida.

​Various parasites can cause meningitis or can affect the brain or nervous system in other ways. Overall, parasitic meningitis is much less common than viral and bacterial meningitis.

Primary amebic meningoencephalitis (PAM) is a rare brain infection that is usually fatal and caused by Naegleria fowleri. Naegleria fowleri is a free-living ameba* (a single-celled living organism that is too small to be seen without a microscope.)  From 1962–2018, 145 U.S. infections have been reported to CDC with no more than 8 cases reported each year.